When in Palawan, everyone tries to visit the Underground River.  Its one of the Philippines most famous natural attractions and has recently been voted as a contender for the Seven Natural Wonders of Asia.  It’s essentially an extensive underground cave system that goes into the cliffs for quite a few kilometers;  Eight, I think.  What makes it so unique is that the entrance is at sea, and the cave system is filled by a mixture of tidal and river waters, making the whole thing navigable by boat.

To visit from our location, we needed to either rent a boat or drive.  I think it was about a 4-5 hour drive, or a 3 hr boat trip away.  We picked the boat trip, for the shorter, unique passage, but it did mean getting up at 4.30am for a 5:00am departure.  Three hours on the banca – each way – with that noisy engine and headphones had me hesitating.  But everyone was a good sport to do it, and we set off just before dawn for the long trip. 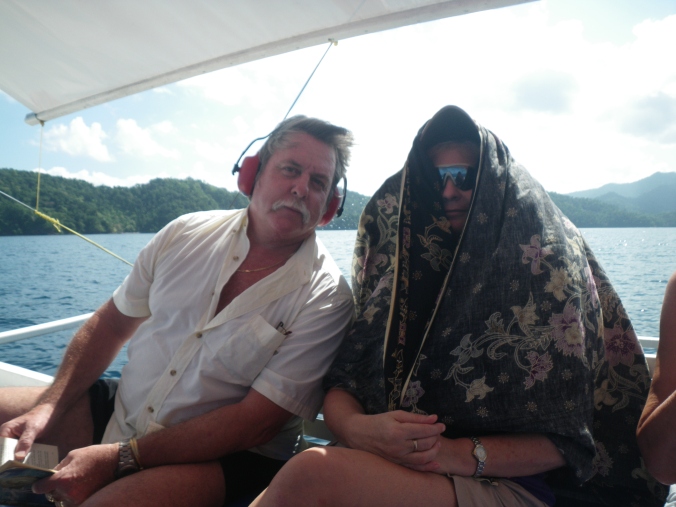 Three hours is a really long time on a vibrating, noisy banana with no cushions or real protection from the elements.  But it was such a unique experience to watch the sunrise over so much of the Palawan coastline, watch the early morning fishermen and putt past small islands off the coast.

Around 8am in the morning, we docked at a small beach and transferred to another little boat to enter the cave.  We learnt that they were expecting the heaviest traffic of the year that day, but we were the first into the cave.  4.30am paid off!  Our tour guide was awful and hilarious all at the same time.  His speech was a memorized script that was delivered in a monotone style – punctuated only occasionally in all the wrong places.  He pointed out the various stalactite and stalagmite formations to us as we sailed through, asking us to see Jesus, the Virgin Mary, mangoes and who knows what else in the formations.  I had a fit of giggles at one point.  He kept instructing Rob to point the boat’s light to the different formations, using the same language over and over again:  “Yes, yes, yes.  Move over there. Higher, higher.  More to the left.  Yes, yes, yes!” This was done so much, and for so long, that it got really creepy, like a bad porno script!

Robert asked him to  give us a few minutes of silence to enjoy the place.  I was reminded of our excellent kayak guide in Palau, who shared information and then paddled in silence a little, letting us enjoy the peace of the place.  (Not here I’m afraid).

Here’s a little footage of the cave entrance before it became to dark to film.  If you listen carefully you can hear our guide jabbering on in the background:

Aside from the guide, the cave was wonderful. I would like to have see more though.  More cave, less guide.  But that’s what happens with development.  Too many people.  I will say they do a very good job of preserving the mangrove swamp around the entrance, keeping tourists to wooden pathways and away from the forest floor.  The place was beautiful, but the boat trip views that really stay with me, despite the rain, hard seats and the god-awful engine noise.  A memorable day. 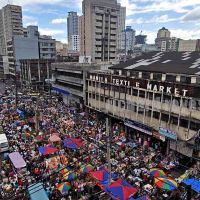