Michelle and I hadn’t been hiking since The West Highland Way in Scotland. And prior to that The Banaue Rice Terraces  and Pinatubo Volcano were our last Filipino hiking experiences at least a year ago.  As we are both leaving the Philippines this summer, we wanted to get at least another one in before we leave.  We’d already missed the cooler months of December through March, and the only non-weekend day remaining on the calendar before departure was May 1…..so May 1 it was..hot or not!

Its amazing how having a hiking goal helps kick me into gear in the gym.  I went from dragging myself down there once a week on a Sunday to going 4-5 times/week on a mission.  (Note to self:  How about always having a hike planned?  It should be easy in Nepal!)

Pico de Loro is located in Ternate, in Cavite province, about a 2 hour drive from Manila. A friend had recommended to Michelle as an accessible day trip, not too difficult, on a well-marked trail, and I think that’s a pretty good summary of the hike.  As with all hikes here, its an up and down event (rather than cross-country).  I heard different times reported on how long it would take.  For us it was 7 hours roundtrip (which would probably would have been 6 hours if I hadn’t kept making us stop!)  Alot of the hiking is a more gradual climb, although there is a steep hour or so in the middle.  I found this exhausting in the heat as I couldn’t handle hiking sticks and a water bottle at the same time. ( I can’t believe I still don’t own a hydration system of some description.)  In general, I found the heat unbearable and I remember how exhausting Pinatubo was for just that reason.  There were times when I had to remind myself how great it was to be out of the city – and it really was….  Manila is not the Philippines, but it is so easy to forget sometimes.

May 1 is a Filipino holiday and I understand Pico de Loro is a popular hiking destination for college kids.  It was lucky we went as early as we did as the groups started to arrive in throngs after us.  At first I was taken aback how many kids were coming from behind, but they were the nicest people.  One group that over took us (because of my huffing and puffing) was kind enough to wait at a split in the path to make sure we took the right route.  And when I took a well earned break on the main ridge, they kindly offered to share all their food with me.  Really nice kids.  Many of them were staying the night and little camp sites starting going up all around.  While I waited for the others to come back from their attempt to ascend the beak, I watched a marriage proposal on a nearby rock.  Very cute.

They do need learn the hiker’s mantra that I was taught though:  take nothing, and leave nothing behind.  It was pretty clean up there, not too much litter, but it wasn’t litter free either.  And when I saw the piles and piles of plastic garbage at base camp that had been collected from a very recent clean up campaign, I understood how bad it could really get. I’m glad I didn’t get to see that.

The trail is marked as easy, and it is really – except for the heat.  Especially by Filipino standards where trails can involve climbing and ropes.  The beak itself I did not attempt, as rope climbing is not for me, but braver souls than me made it all the way to the top.  An accessible day hike from Manila.  Best done with an early start, December-February on a non-holiday weekday for a little more peace and solitude… 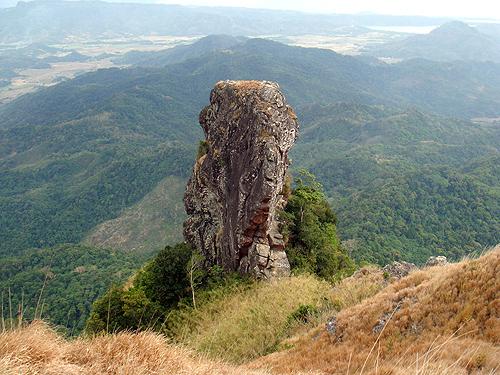