I’m glad I did my homework before visiting Port Royal, one of the few remaining forts in Jamaica from the days of British colonialism and pirates. There’s not a great deal of history left in Kingston, and visiting Port Royal is a easy day trip for new arrivals to the city. There’s not much left to see, but a HUGE amount of history, most of which now sits hidden on the ocean floor.

Its easy to see why the British built the fort at the mouth of the large, protected bay of Kingston.  On the modern map above, this strip of land now hosts Kingston’s Norman Manley international airport.  You can see the long rectangle in the middle of the map that is today’s airport runway, so visitors to Port Royal must drive out past the airport to discover its charms, which is what we did a couple of weekends ago.

The first surprise is just how suddenly the city ends after the airport and the road appears to continue to nowhere, and sleepy Port Royal is as close to inhabited nowhere that I have seen.  People are just slouched around in the heat,  dogs are napping, stretched out in the middle of the street.  Barely a car passes by.   However, the well-preserved fort was open to visitors and our guide waved and introduced herself, but clearly had no intention of actually doing a tour.  We didn’t mind this too much.  I had done my reading beforehand and we walked around the restored building, toured the small museum and looked out to the sea beyond to imagine what lay beneath.

On June 7 1692, a huge earthquake hit the busy, prosperous Port Royal.  Famously dubbed “the wickedest city on Earth”, Port Royal was once home to pirates and their plunder, bars, brothels, and riches galore.  It was the original Sin City of the Caribbean, its riches built by UK-government sanctioned pirates, looting from passing Spanish and French ships.  In return for limiting their operations to foreign vessels, for over 70 years the pirates were deemed to be “privateers”, and allowed to stash and spend their spoils on the nefarious peninsular without hindrance or taxes.  Two-thirds of Port Royal fell into the sea that day and the vast majority of it still sits untouched and preserved as it was four hundred years ago.  Whole streets, buildings, and every day life lay buried on the sea floor and the lure of buried treasure and history has been of great interest to a number of diving expeditions over the last century.  Many of the artifacts they discovered now sit in Port Royal’s museum, but excavating the city that is still down there remains an enormously expensive proposition.  There were plans 30 or so years ago to open a Williamsburg-like pirate attraction but it threatened the preservation of the sunken city itself and was shelved.  Modern plans to develop the site for cruise ship visitors, complete with a sunken visitors center and the possible excavation of some of the city seem to buried in problems of money, investors and environmental concerns.  Its hard to tell from the internet articles, but the project seems to be forever stalled.  If done right, it would be a wonderful world heritage site and a massive injection of money and work opportunities into the otherwise dead local economy. 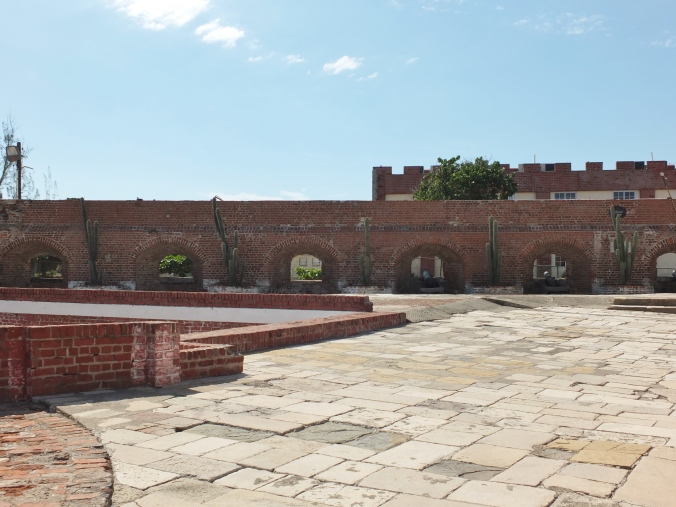 The courtyard of the sleepy fort 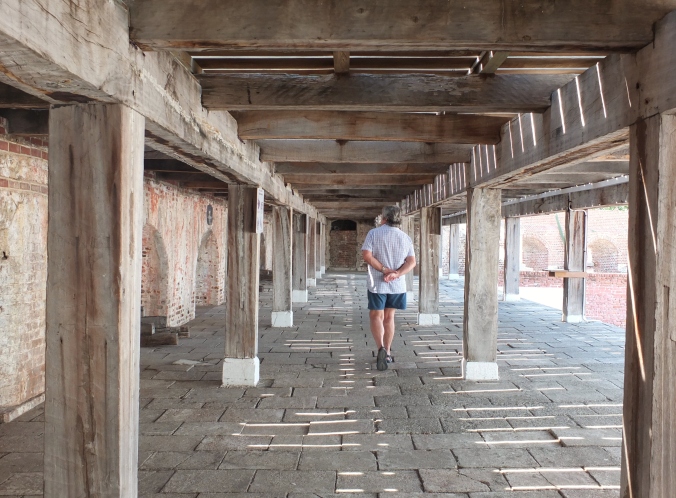 Strolling through the fort’s quiet walls

Peeking out from the battlements.  The canon is missing here but there are plenty still on display elsewhere in the fort.

At the back of the fort are more modern remnants of its years as a successful British Royal Navy dockyard until 1907 when the next major earthquake struck the area.  Many buildings were destroyed, but a few still remain, including the ‘giddy house’ which sits half buried in the sand.

Original built to store guns and artillery, the giddy house is now an odd place where visitors can enter and experience the disorientation of slopping walls and floors….hence the name! 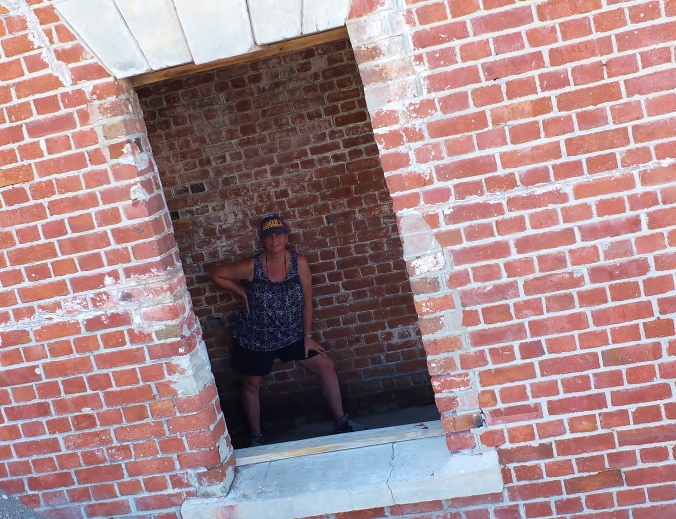 Showing just how much gradient was inside

Other restoration projects are underway.  The Royal Naval Hospital is currently being restored and was too boarded up to take pictures.  However, I did stop into the 18th century St Peters church to have a look around during its current restoration. Two earlier churches on the site were destroyed: one in the earthquake and another in a later fire.   There were also a couple of other places near Port Royal that warrant short posts of their own, so they will follow… 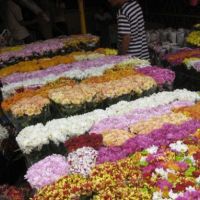 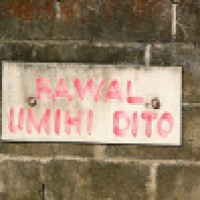