I’ve always associated this strange knobbly fruit with Captain Bly and the Bounty but I had never actually handled one, eaten it or seen one growing on a tree, but I knew it was popular here and I looked forward to trying it.

In Jamaica they are probably second only to rice as the important carbohydrate content of a meal, although from a little reading I learnt that West African slaves in Jamaica didn’t take to them at first. But the trees grow well here, producing an abundant amount of fruit year round and they eventually became an important part of the local cuisine.

Breadfruit dishes can be roasted, mashed or fried,  but they all start out being cooked on a flame until they are blackened all over.  I really wondered what these guys were doing with their drum barbecues and piles of blackened footballs along the side of the road.

Whatever were those blackened balls? Now I know…

I have to admit I was really disappointed the first time I tried roasted breadfruit. I didn’t think about “roasted” meaning anything other than crispy, and was disappointed to get a pallid slab of white vegetable that looked (and tasted) a lot like a sponge. I suppose a lot of carbohydrates eaten worldwide — rice, bread, tapicoa — are pretty bland. Its how we use them to eat other parts of our meal. Its how they sop up the gravy, how the remind us of a homemade dinner or give us that feeling of comfort food and a full belly that really make them a favourite. Of course, my experience lacked that connection. I didn’t eat more than a couple of bites.

I tried them again fried and like them much better. (I’m afraid that its true that most things taste better fried.) The same pre-roasted slices of breadfruit had been dropped into hot oil and browned, giving me something which was much more like the “roasted” I had expected the first time. An improvement, but not enough to make me seek it out on a menu again.

Fried breadfruit…better than the roasted!

In modern kitchens like ours with no gas, the barbecue is the only way to cook them and the production involved means that I haven’t had the drive to experiment with the fruit. A little tour of the internet shows me other have been quite creative with breadfruit used in a wide variety of recipes other than just the ubiquitous, basic roasting and frying.

For me, however, all-in-all not a great new culinary experience, but I do enjoy seeing them around and they grow on some very pretty trees. 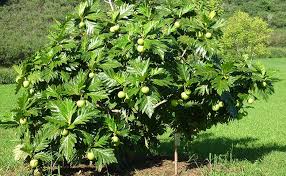 11 thoughts on “B is for Breadfruit” 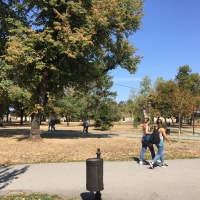 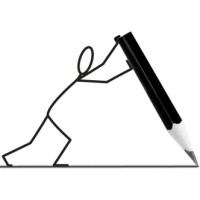 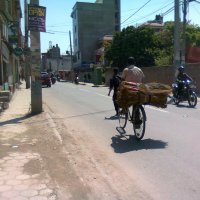